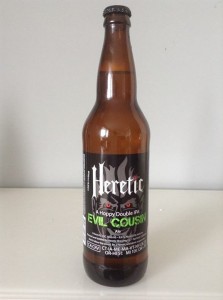 “Evil Cousin is Heretic’s take on a West coast imperial IPA. This beer is a bold, in-your-face hop monster. It has a light, easy drinking malt character that allows the hops to stand out. The hop character in this beer is intentionally on the dank side; big, sticky, and aggressive. This beer is for those of you who can’t get enough hops. Join us on the dank side.”

Heretic by name heretic by nature. An expression that perfectly sums up our younger years and an expression that perfectly sums up the style of these brewers. A freethinking state of mind that has their beers not only winning awards but has them frequently rated in the top 20 best breweries in the U.S. Not a bad feat eh? Served into an IPA glass. Pouring a deep amber with excellent clarity and holding a head of roughly three fingers in height. Impressive retention on show, eventually forming a dense layer over the top with healthy lace trails being omitted. When it comes to big, aggressively hopped IPA’s the West Coast IPA is still numero uno….and this is why! Huge citrus fruits such as grapefruit, passion fruit and orange erupt out of the glass. A tonne of sweeter fruits – pineapple, lychee and mango – are also here a plenty. Dank, woody resins, peppery spice, alcohol, a touch of herbs and even a buried caramel malt base that unsuccessfully tries to balance. It’s all here. Simply superb! The mouth feel has a slick texture to it. An aggressive hop bitterness on the front palate is gradually smoothed over as it continues toward the back end. Only a moderate body on her though, not a lot of weight as it drinks with ease. The 8% ABV isn’t scared to show it’s strength either, becoming quite sharp through the mid and really stamping it’s mark in the finish. But as always with these glorious West Coast IPA’s the blend of bitter and sweet fruits is championed. Everything from grapefruit, orange and mango to lychee, guava and pineapple. Throw in some peppery spice and some caramel malt to sweeten the deal and it’s one memorable DIPA in our glass. Freakin fantastic, this is why we drink craft beer….who said the IPA was dying? Never!!!