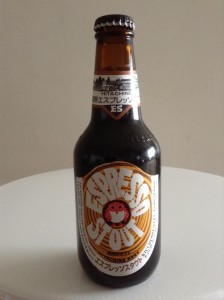 This Japanese brewery, along with many others, come with very colourful histories that are really interesting. Originally ‘Kiuchi brewery’ named after the founder Kiuchi Gihei, the Hitachino nest (as it’s better known today) only came around in1996 after decades of brewing mainly sake. The brewery has now also taken on a huge vineyard and is best knows for this stout and it’s well known white ale.

On to the beer….which we served in a beer tulip. The appearance displays a dense black with a one and a half finger brown cap that firmly retains. Tonnes of thick lacing is strewn all the way down the glass. The aroma features the espresso coffee really well with a dominance over lovely undertones of soy sauce, dark chocolate, molasses, burned sugar, treacle and cherry ripe. In the mouth it’s thick and creamy with mild carbonation. The body is full, coating the palate and gripping the tongue on the way down. Divine drinking. The front palate is absolutely inundated with a decadent mix of bitter espresso, toasted malts and dark chocolate. Without any of these three tapering off the flavour profile only gets bigger with additions of creamy cocoa and vanilla through the mid, eventually finishing with a solid roasty bitterness with incredible duration on the tongue. The 7% ABV is perfectly balanced as it’s at times noticeable but never overpowering. This is one highly palatable stout, brilliantly brewed and overflowing with flavour. Move aside sake, the craft beer revolution is alive and well in Japan.