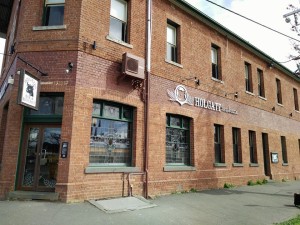 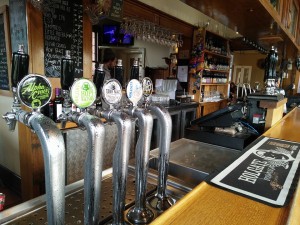 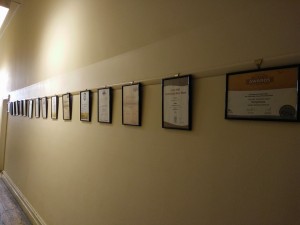 Putting trail blazers like Lord Nelson, Sail & Anchor and Scharer’s aside Holgate would definitely have to be considered as one of the craft breweries that really launched Aussie craft beer in to the revolution we are all now enjoying years on. Along with big names that we all recognise today such as Mountain Goat and Matilda Bay, Holgate is another brewery that can claim to being established before the turn of the century, decades before it was considered popular. But unlike other big craft breweries, Holgate is still 100% family owned and operated since 1999, brewing off site until 2002 until they shifted operations to the brew pub they’re still in now on the corner of Anslow St and High St in the gorgeous regional town of Woodend. Inside the sturdy red brick building is a somewhat traditional English pub feel with its old wooden floors and bar, cosy drinking area with bar tables and stools and finished off with stained glass windows. The shiny 13 tap system provides some contrast and is designed to make you thirsty – and it works! Out of the 13 taps 8 are already preset for their tasting paddle which went as follows; 1) Norton Lager – smooth, sessional and pretty safe. The people’s beer. 2) Mt Macedon Aussie Pale Ale – restrained hoppy nose, well balanced with mild bitterness. Not a lot happening though. 3) ESB – hand pumped at room temperature, caramel, toffee, sweet and bready. Thin texture. Very traditional ESB. 4) Alpha Crucis Aussie IPA – tropical fruit aroma, fresh, hoppy, nice contained bitterness and a fruity palate. Tasty IPA. 5) Temptress Chocolate Porter – hand pumped, lovely roasted nose with chocolate and coffee. Smooth texture, slight vanilla sweetness with more chocolate and coffee on the palate. Brilliant beer, one of their best. 6)Hop Tart Sour Pale Ale had a slightly floral and slightly zesty aroma. Mild tartness. Light on with fruity and zesty notes in flavour. A bit weak and insipid. 7) Kristallweizen – This was interesting, it had a subtle honey sweetness with spice, herbs and citrus rind on the nose. Flavour follows the nose with additions of banana runts and candy. Not bad. 8) Hopinator American IPA – dank, piney and resinous on the nose. Tropical fruity taste boosted by alcohol and balanced by a bold caramel malt base. Bitey mouth feel. A really well structured IPA. The pick of the beers for us. If you rather drink your choice of craft outside there is a generously sized beer garden out the back that gets drenched in the afternoon sun, the perfect way to warm up the bones on those bitterly cold Victorian afternoons. The pub as a whole is deceptively large. Other than the main bar area and the courtyard there’s multiple dining areas, what one could describe as a tasting/conference/meeting room, an upstairs area and the brewery itself at the rear of the building. Just a heads up too, don’t bother bringing your growlers as they don’t do refills. What they offer are mixed 4 and 6 packs for takeaway so you don’t have to leave empty handed. If you aren’t as lucky as the locals  then we’d suggest to make the trip to the brewery and check it out and grab a few roadies on your way out. Cheers!