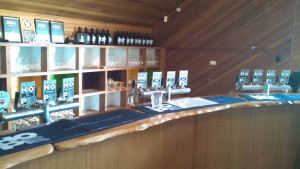 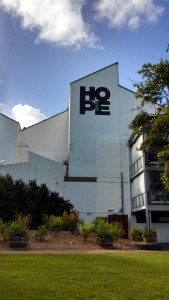 What do you call having boutique wines to taste down one end of the bar and 12 taps of craft beer down the other? Being spoiled for choice is one description, heaven is another. That’s what is on offer at Hope Estate/Brewhouse. In 2014, Hope Estate decided that drinking crap festival lager in the picturesque surrounds of the Hunter Valley made no sense and we tend to agree, vehemently. So they built a brewery with enough tanks to pump out as much craft beer as they do wine and the head brewer, who brings years of experience in wine making at De Bortoli, is keeping himself extremely busy. The tap list consisted of a Munich Lager, Australian Pale Ale, American Pale Ale, gluten free Pilsner, a mid strength Blonde, Belgian Blond, Hefeweizen, IPA, Black IPA, DIPA, Robust Porter and a Cider. I’m tired just from typing all of them so just imagine brewing them all! Although it’s all well and good having a huge selection which covers almost every palate possible we would always choose quality over quantity and therein lies the problem. Some of the beers were simply not up to scratch. Their savior is the Double IPA and the Porter which were really enjoyable beers. Both the Pale Ale’s, Pilsner, Lager, IPA and the Black IPA were standard but they really lost us with the Hef and both the Blonde’s – unbalanced and very homebrew-like which to be honest were pour outs. That’s as far as our negative comments will go though. The main building itself is a little dated but it is well set out with extensive outdoor seating and sweeping views of the Valley can be taken in from the upper floors. Other than a few bad beers they have the right idea, in fact we’re pretty sure they’re the only winery who offer a huge selection of craft beer that’s brewed on site then served to the punters who attend the festivals and big ticket concerts that are regularly held there. It’s also quite centrally located – off Broke Road opposite Pokolbin Village, so it’s your best option to throw in some grain between the grapes. A few little tweaks and, for us, this place would be a permanent stop every time we go to the Hunter.