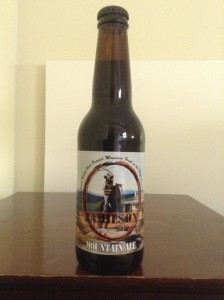 “The Mountain Ale is a modified and improved version of the original Dark Wheat Beer.This has a dark brown colour with thick foamy head. This beer has distinct chocolate malt flavour with caramel tones. The Mountain Ale is brewed with 60% wheat and is unfiltered. The high protein levels of the wheat gives it a creamy smooth finish. Awarded Silver (Top of Class) in Australian International Beer Awards.”

This is a superb Australian brewery. From the brewers of the Jamieson beast IPA comes this version of an original dunkelweizen. Served in a weizen glass the dark mahogany pour produced a short creamy head that peels off and settles to a thin film on top. OK lacing. The aroma is offering a mildly sweet aroma with a decent backing of chocolate, caramel, bready malt, cream, spice and grain. Medium carbonation with a slightly oily mouth feel. Very palatable. Sweet Dark fruits make up the fore flavour which is followed by creamy, malty, toffee-like undertones in the mid. Nice subtle hop bitterness in the finish that endures through to the back palate. Only a very light funky hint throughout but other than that there are no real wheat characteristics to speak of so, personally it presents as more of a dark ale. 4.9% ABV doesn’t really play a role so we thought it could have been a little higher. Nonetheless a good attempt at an old German favorite.