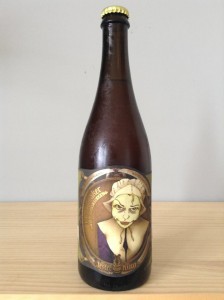 “The culprit behind the Salem Witch Trials was not demonic possession (which would have been kind of cool), but ergot-infected rye. Wild yeast native to our land in the Texas Hill Country lends a sense of place to this earthy, floral farmhouse rye beer. Unfiltered, unpasteurized, and 100% naturally conditioned.”

Served in an IPA glass. This interest-arousing IPA pours to an attractive hazy amber glow with a gushing four finger crown forming over the top. The head steadily recedes to a fluffy overlay that draws patterns of blotchy lace trails down the glass. It’s pretty complex on the nose but with a title like ‘farmhouse rye IPA’ that’s to be expected. The first thing that deserves a mention is the balance between the funky, bretty sourness, the spicy rye and the fruity hops. This kind of divine synthesis has all three elements complimenting one another. As the olfactory’s dig a little deeper we detect tart and slightly acidic notes of lime juice, bitter grapefruit, champagne, pear and hibiscus or elderflower. Great depth here. Really multilayered aroma. Again, quite well balanced in the mouth. A spritzy Co2 level is gradually overtaken by a mild acidity that’s bolstered by a warming 7.3% ABV. The rye malts play a big hand in the assertive bitterness (71 IBU) upfront as the estery and almost acetone-like astringency follows. Bitter grapefruit and lemon carry over the dry mid palate leading on to a sharp, peppery finish with a persistent citric bitterness on the back end. Ooph!! This bad boy packs a real punch and if it came down to a race between the farmhouse, the rye or the IPA then the bretty farmhouse wins comfortably. What intensifies this beer though, is the discernible presence of the spicy rye and bitter hops that bring up the bottom end and ultimately complete this intricate IPA. Let’s finish by saying this was our first from Jester King and it certainly won’t be our last.