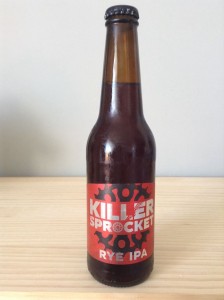 “Killer Sprocket Rye IPA is an American style IPA with a large hop presence. The beer utilizes 16% rye in the malt bill to provide a dry and spicy finish. We used Columbus as a dry hop to enhance the nose and create a more rounded flavor.”

This is our first entry for these Victorian gypsy brewers. Well, technically, as we did review their collaboration (Kaks Cotmari BIPA) with Kaiju. They certainly surround themselves with good brewers, initially brewing out of Southern Bay’s tanks in Geelong and eventually making the move to Melbourne to brew at Cavalier. OK, on we roll. Served in an IPA glass, the cloudy amber appearance is capped off with a persistent two and a half finger crown that refuses to shrink down. Excellent head retention and as expected, thick and blotchy lace trails are left clinging to our glass. What a sight! The first thing we smell are those gorgeous rye malts (16%). Nice and spicy with a strong dried tea leaf character. Very dry, very peppery and nicely balanced by an injection of sweet, tropical fruity hops such as grapefruit, mango, pineapple and lychee. It may just be bias but rye IPA’s would have to be our favourite style of craft beer. The mouth feel tells a bitter old story. Dry and extremely bitter with an IBU of 84. A slightly over-represented ABV of 6.2% adds to the astringent feel. Body is medium and Co2 is moderate. Upfront it’s an all out hop assault as the hops suck every last drop of saliva off the tongue. As it subsides the firm herbal notes come through bringing spicy tea leaf, pepper and a hint of wood shavings. The finish is dry and super bitter and it lingers on the back end for what feels like an eternity. Wow, you won’t hear us say it often but it’s almost too bitter. It’s not that it needs less hops it just needs more malts to show through. The aggressive bitterness drowns out any real malt character and deems it all a little unbalanced. A shame because it was shaping up to be an absolute pearler.