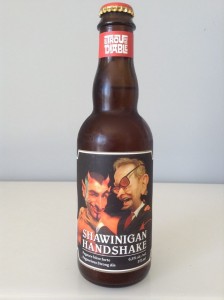 “This beer is inspired by the Brooklyner -Schneider Weisse brewed in collaboration by two titans of beer: Hans Peter Drexler and Garrett Oliver . She wants to be a nod to two men known for their iron fist and their keen sense of humor, a former Prime Minister shawiniganaise original and the other former coach in the National League , as well as ‘in an affectionate appellation now made famous . Lovers of weizen and American IPA will be embraced happiness before this joyful hybrid.”

Our 3rd entry in about as many weeks for this French-Canadian brewery. We’d have to give full points for this fantastic artwork on their strip too. Very characteristic. We served this weizen bock in to a beer tulip. The pour provides us with a slightly hazy straw-golden appearance that knocks up a fluffy 3 finger head that retains tremendously well. Laced healthily, leaving thick patches of foam behind. The nose presents itself predominantly as a German weizen/Witbier. We get strong wafts of spice (clove, nutmeg, pepper) banana bread, soft candi sugars, apricot, wheat malts, minerals and bubblegum. We are certainly getting the weizen but we aren’t getting much of the bock. Take nothing away from it though, it’s a solid aroma. In the mouth it’s full and extremely frothy with high carbonation levels. We know it sounds strange but it’s actually quite light on and palate-friendly. An explosion of bubbles on the tongue gets us underway as light spices blend with hints of banana, wheat and hay upfront. A firm alcohol warmth (6.5%) hits the back of the tongue as the initial flavours move through the mid and take on a sort of Gose-like saltiness. The finish is mild spicy and yeasty with some lingering flavours of hay and marshmallow on the back palate. We’ll be honest and say that we don’t have a lot of experience with weizenbocks but this brew is pretty damn good. The only fault we can uncover is that there is hardly any bock character in here at all. We love the emphasis on the big, wheaty aroma and flavours, although we were banking on a rich, dark lagery component that was missing in action. Hey, that’s probably what the brewers were after, we don’t know. Either way it was an enjoyable beer.