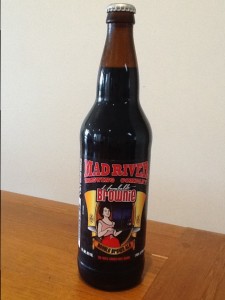 This Californian brewery has a thing about no story on their labels, so we don’t know much about this drop, other than its a double brown ale (9% alcohol vol.) brewed with cocoa nibs, and that this beer is part of an artisan serious (2 of 6). It’s obviously trying to replicate a chocolate brownie, which sounds delightful.

Poured into a pint for maximum joy, we get a cola colour with no head at all in this glass. We see mild carbonation bubbling up to the surface, which looks oily. No lacing either due to his oiliness. Definite aromas of chocolate, molasses, nice roasted malts and dark ripe fruits. First sip is very pleasing. Gentle alcohol heat which does not overpower combines with a smooth milk chocolate, and spice on the lips, alongside a surprising mild citrus hop hit. It’s unbelievably smooth and balanced for 9%! The alcohol balance here really brings out the cocoa, and you certainly can imagine having a chocolate brownie. The hop bitterness sits very gently on the tongue, again with mild citrus flavour. This must be the cascade and willamette hops used after researching this beer on their website. Toffee and nutty flavours from the malts combine perfectly on the palate, and adding the cocoa nibs gives it a mild sweetness but not sickly. It’s almost drying but again it’s so smooth and balanced that no faults can really be found. The surprisingly medium sized body enables you to smash it down comfortably without feeling pissed. This is a damn fine beer. This almost equals the breweries’ steelhead double IPA in terms of enjoyment, and balance. Brilliant double brown ale here.