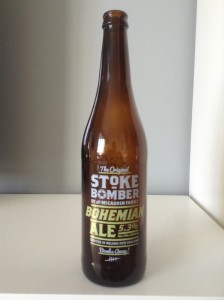 .”Light golden yellow in appearance, with a citrus aroma and crisp fruity highlights, Stoke Bohemian captures the essence of summer in a bottle.”

After about a ten minute perusal of other sites we still aren’t exactly sure which category of beer this one fits in to. We’ve seen some call it an APA, a golden ale and even a hoppy pilsner. While all of these are fair assumptions we believe it’s simply an ale/lager hybrid and that’s exactly what the brewers intended. Anyway…on with the review. Served from a 650ml bottle (or bomber if you’re a yank) in to a shaker glass. Slightly hazy golden in appearance with a modest one finger head topping it off. The head is maintained well, eventually receding to a wispy layer of fine bubbles. Not a great deal of lace but some random patches of spotted residue clings to the walls of the glass as it ebbs. The concept of an ale/lager hybrid is again revisited on the nose as fruity hops lift out of the glass while the more delicate and grainy wheat malts run underneath. We do get a slight mixture of stone fruits, kind of like a fruit salad where it’s hard to identify only one type. Maybe a spicy hop undertone with a hint of honey too. Not a bad aroma, just slightly muddled. In the mouth it’s medium bodied with a light, dry texture. The Co2 levels are moderate and the mildly assertive bitterness adds a little more tickle on the tongue. Honey and a notable zesty citrus character is tasted upon entry. The hop bitterness does intensify through the mid as do the grainy wheat malts. Suggestions of stone fruits form late, delivering the dry, fruity finish. 5.3% ABV. To be honest it’s not a stunning beer but it definitely has high drinkability and would be pretty easy to session on. Not bad, but we both agree that the KPA is only somewhat better. Middle of the road kind of beer.