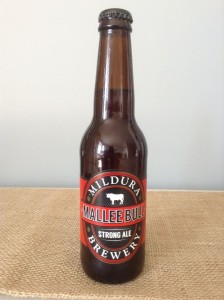 “I have to admit that I have never seen a Mallee Bull and so in my imagination, such a creature only exists metaphorically as a myth to express the idea of strength. This beer certainly has strength, both of flavour and character. It is a great accompaniment for rich comfort foods of substance such as raised beef cheek. This is a beer with personality and doesn’t shy away from robust encounters.”

Served in a shaker glass. The slightly hazy amber pour knocks up a modest one finger head which slowly peels off a few millimetres before settling to a fine covering over the top. Thick, soapy lacing is left clinging to our glasses. It’s an all malt affair on the nose as we take in some lovely caramelised aromas. Toffee would have to be the dominant scent, but layers of honeycomb, stone fruits (apricot, raisin) fig and caramel fudge add a firm depth to this aroma. Solid start. The mouth feel is surprisingly light on with a silky smooth texture. Carbonation levels are quite mild also which unfairly conveys a slightly slippery feel. It’s n no way watery but it is flirting with being a bit too thin. A delicious caramelised malt sweetness promotes a soft, nutty character upfront. Rich toffee takes a hold of the taste buds as a mild hop bitterness flows through and leads on to a sweet, sugary finish with a suggestion of roast on the back end. Personally, we think this is a damn good representation of an amber ale, although we don’t quite get the “strong ale” as suggested on the label. Some may argue but we feel 5.6% ABV doesn’t really classify it as strong but rather a level at which we wished more brewers would brew this type of ale at. With exception to Mountain Goat’s ‘fancy pants’ amber ale, it’s hard to find a good amber ale with enough body and flavour at low ABV’s. Essentially, it’s not really a strong ale. More of a well brewed and highly palatable amber ale.