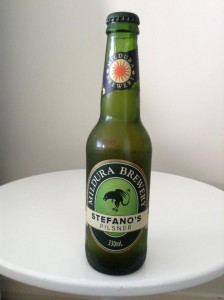 Quite an interesting little piece of history that comes with this brewery’s establishment. Back in the early 1900’s the building the brewery is in was originally a picture theatre which was renovated and renamed the ‘Astor theatre’ some 12 years later (to which their pale ale is named). The brewers like to name their beers after their surroundings and the people, so this was named after their head chef – Stefano de Pieri.

Served from the bottle into a flute. The clear golden appearance offers steady carbonation with good transparency. The compact 1 finger white head gradually peels off to a fine layer without much lace. Our first thoughts of the aroma are crisp and really clean with a firm honey malt backbone. The Saaz hops work well in tandem producing a subtle woody/spicy aspect along with mild citrus and pine notes. In the mouth it feels smooth with good grip on the tongue. Definitely in the fuller bodied range with moderate carbonation. The palate initiates with a light, but noticeable bitterness upfront. Sweetness from the malt is tasted as crispy notes of pine and spicy hops flow through the mid leading to a clean finish with reasonable length. 4.7% ABV. Very easy drinking and ultimately highly sessional pilsner here. Light but still well-bodied with full flavour. This is a nice pilsner.