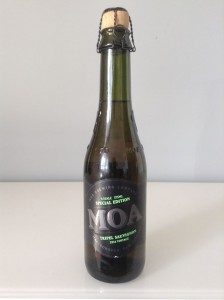 “A Belgian style Tripel experimental fusion beer where the candi sugar adjunct was replaced with unfermented Sauvignon Blanc grape juice from the 2014 Marlborough harvest. The end result is a beer where the typical Tripel banana and spice fermentation derived characters are complemented by vineous yet fruity and tropical notes.”

This special edition release also came with a rum barrel aged Quadrupel which we reviewed very recently. Unfortunately it was way off the mark for a quad so we’re really hoping this Tripel can restore back some faith. Corked and uncaged then served in to a beer tulip. The appearance offers a bright golden colour with good clarity. The short and compacted white head grew to about 1cm before collapsing on itself, leaving a thin film over the top. Some lacing is left to be seen, but it’s watery and sparse. The aroma is a little restrained for a Tripel, we are getting some delicate wafts of your typical Belgian yeasts – banana, clove, apple/pear and esters but they are slightly outweighed by the wine components – white grapes, stone fruits and lime. To be honest the two characteristics do work well together without any sort of clash. Decent aroma. In the mouth it feels light and oily with mild carbonation. Medium bodied. Very palatable, it seems to breeze down with hardly any grip. Following on from the aroma is, again, another decent display of balance between the sweet Belgian yeasts and the fruity NZ grapes. Initially, like the aroma, flavours of banana, pear, alcohol and muted spice are followed by grapes and stone fruits with a slight Sauvignon-like acidity. The subtle alcohol (9.3%) warmth seems to gel the two combinations together as it finishes light and dry with an emphasis on spice. We would have to give points here for daring to put a spin on a Belgian recipe that’s been brewed the same way for hundreds upon hundreds of years. Unlike the rum barrel quad they have got the balance right. Give me an original Belgian Tripel any day but this spin on a classic style has to be respected. Gutsy, but it’s come off and it is quite a nice beer.