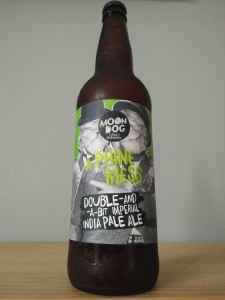 “This beer is the hoptastic liquid equivalent of a relaxing vacation at a 3.5 star tropical resort. The fresh fruit platter from the breakfast buffet. A cooling dip in the lagoon. Paddle up to the swim-up bar for cocktails in the sun.”

Served in an IPA glass. Super cloudy orange pour, muddy even. Has a NEIPA look to it. Healthy two finger crest forming on top. Retention is superb which allows for a thick and blotchy lace to cling as we indulge.
There’s a fair bit going on here, quite complex indeed. The most notable feature is the dank, boozy pine resins that are being well supported by fleshy tropical fruits like mango, paw paw, rockmelon and lychee. Hard to miss the chewy caramel malt base too, bringing this moreish sweetness to the party. Something we can’t quite put our finger on as well…musk maybe? Whatever it is it works in well.
The 10% ABV certainly shows its hand early on. As the burn subsides the somewhat oily texture develops an assertive bitterness on the rear. Medium body with unexpectedly low Co2.
Flavour wise….well, there’s two words. Palate wrecker! The booze plays too big a role and once the 70 IBUs take hold there isn’t a whole lot of flavour allowed through. In saying that though, we can pick up a hint of sweet caramel malt with a dominant grapefruit tone over the top. Some unripe pineapple and a heady spice rounds it all out.
It has been a long time between drinks for us and Moon Dog. Not sure what happened really, they kind of fell off the face of the earth and returned a little while back with their new pale and dark ales. It’s great to see Moon Dog back brewing their edgy and super crafty beers again though.