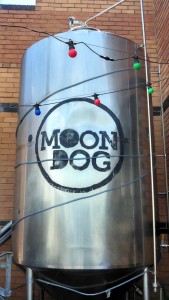 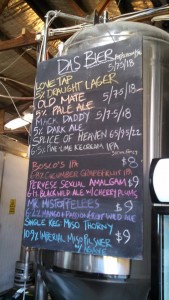 Let us start with a fact: Moon Dog is a highly respected craft brewery and one that’s indisputably earned a permanent spot in our top 10 all time favourite Australian breweries. That explains why it was top of the list of our must visit Melbourne breweries.Once we touched down in Melbourne we dropped our bags off at the hotel, hopped in a cab and went straight to the brew house in Abbotsford. Locating the place took a bit of luck but one thing is for certain – once we walked in we knew we were at the right place. OK, if you’ve tried a few of Moon Dog’s beers you would already know that they brew some pretty whacky, very experimental and seriously quirky beers and the decor of the joint is no different. It’s like shabby chic meets industrial paradise. We have palms, barrels, mismatching tables and chairs, odd things hanging from the roof and weird pictures adorning the walls. It’s enough to give any interior designer a heart attack but enough to make the most alternative craft beer fanatic feel at home. We like it. The selection of beers ranged from their seriously sessional ‘Love Tap’ Lager to the delicious ‘Bosco’s’ IPA through to the hedonistic yet moreish ‘Spotted Dick’ Barleywine. Standards like their Pale Ale and Dark Ale were nicely offset by the two crafty wild ales but the beer of the afternoon easily goes to their single keg ‘Miso Thorny’ Imperial Miso Pilsner that had lashes of agave and literally drank like a good Belgian Tripel. Bloody amazing stuff. We had to pick our beers wisely, though, as all the ones we wanted to try were either doubles or imperials so we were definitely a little wobbly as we left! This was only a short visit as we only have 2 days to get through this awesome bloody city! Take it from us, if you’re planning a trip to Melbourne then do your taste buds a solid and drop in and try one of these extremely craftified beers. You won’t regret it.