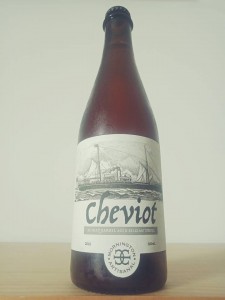 “Cheviot is a strong Belgian Tripel offering a complex spiciness and assertive fruitcake flavours. 10 months ageing in Shiraz barrels add an extra layer of vanilla and oak intensity, followed by lingering notes of strawberry jam to deliver a decadent beer worthy of savouring.”

Appearance: It pours a bright and bold amber hue with a short head perched on top. There’s a gradual reduction but still a fine lace is carved out on the glass.

Aroma: Very interesting. Very intricate too we might add. The 10 months in Shiraz barrels have had a great effect on the beer in the way that it really showcases those juicy blackcurrant and strawberry notes along with French oak, spice and plums. We get a lot of mixed spirits coming through too – rum, brandy and a hint of bourbon are the most dominant. Fantastic aroma.

Flavour: Initially we couldn’t pick up any Tripel qualities but they’ve actually been fabulously interwoven through the fruity, spicy and liquer-ish notes very well. There’s a bunch of flavours we just can’t put our finger on but they taste something like Cadbury’s fruit & nut, cherry taffy and some kind of earthy berry like mulberry.

Mouthfeel: Quite full and chewy yet it’s far from being heavy. Mild-moderate co2 with an adequate warmth from the 9.5% AbV.

Overall: It’s actually a difficult beer to summise. In short it’s a complex little number that deserves more credit than it gets. It’s quite an impressive drop.