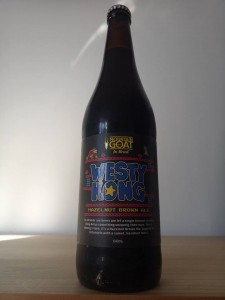 “It’s time to get it on like Westy Kong! Our latest Rare Breed is an In-Breed brewed by our very own barrel wrangler, Westy. Westy loves brown ales and he’s been waiting so long to get this one on the go he’s gone just a little bit nuts. Hazelnuts, to be precise. Hazelnut meal was added to this classically silky brown ale and the result is a multi layered flavour hit of caramel, biscuit, delicate hazelnut, chocolate and coffee, rounded off with a moderately bitter finish.”

Appearance: Deep chestnut colour which reveals ruby red hues when held to the light. It forms a dense two finger head that persists and works a magnificent lace down the walls of the glass.

Aroma: In some ways it’s your run of the mill brown ale and in other ways it isn’t. The hop profile is almost all American so it’s no surprise to pick up pronounced citrus notes, pine, light florals and spice. Although they almost battle with the hops we are getting roasty and buttery hazelnuts along with the usual brown ale base of biscuits, roasty malts and dried dark fruits. Intriguing.

Flavour: Follows on from the nose with this almost black IPA-like assortment of citrusy American hops and toasty malts on entry. Upfront it’s all orange-infused chocolate, jaffa, pine and earthy spice with the hazelnuts and dried dark fruits coming through the mid. A late hop bitterness then rolls in to a nicely balanced fusion of citrusy hop and toasty malts in the finish.

Mouthfeel: Somewhat slick and velvety at first then drying in the swallow. Mild-medium Co2 with similar body. The 6.4% AbV is well concealed though.

Overall: Not fussed really. We were expecting a nice malty, nutty number but we get a weak black IPA inspired ale which is just weird and unnecessary. The frustrating thing is the typically dominant American hops pretty much drowns out most of the feature flavour, which were the hazelnuts! Confusing.