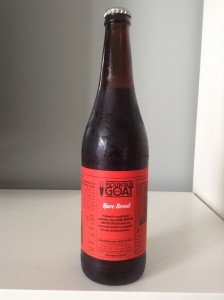 “IRA is heading out of the brewery this week in Rare Breed format. We’ve used some specialty kilned malts to throw a red hue and produce some great caramel / toffee aromas and flavours. No less than five hop varieties including Cascade, Amarillo and Ahtanum. 6.6% ABV, 60 BU’s.”

We’ve recently tried 8 wired’s version of the IRA and scored it a 10/10. We put Mountain Goat on the same shelf as 8 wired so this should be a great test to see who reigns supreme. Served in an IPA glass the deep ruby red pour produced a one and a half finger head of off-white foam that retains well. Thick spotted lacing is being strewn all the way down the glass. The aroma boasts an excellent balance of caramel malts and stone fruits. Plenty of depth in the nose here. Additions of either raspberry or strawberry, tangerine, subtle grapefruit and some subdued peppery spice add brilliant character to this aroma. Medium carbonation in the mouth with a vibrant bitterness (60 IBU), full bodied along with a slightly effervescent texture. An assertive hop bitterness initially teams up with grapefruit and orange peel which leads to a rich, malty mid-palate along with hints of caramel, jaffa and toffee. Again, bitter notes of grapefruit carry forward and is rounded off by a firm bitter finish with lengthy duration. The 6.4% ABV is spot on. This is a brilliant IRA, not a lot of difference here but we feel the 8 wired just pips it at the post. Huge recommendation from us though, top shelf stuff.