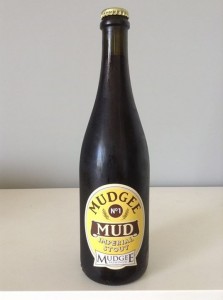 “The legend of Mudgee Mud was born at the Federal Brewery, which produced export quality beer in Mudgee from 1891 to 1956. They originally used water from a local well, but when town water was introduced, the beer quality deteriorated. Sediment was left in the bottles, inspiring the nickname, “Mudgee Mud.”This Imperial Stout celebrates the legend. (Without losing the quality!) Mudgee Mud is a rich and smooth stout which boasts hints of aniseed and liquorice undetones. Topped off with a creamy head this stout revives the legends of brewing in Mudgee.”

This is one of three seasonal releases we picked up from the brewery in Mudgee. Served in a beer tulip the mat black pour produced a big three finger tan head that eventually settles to a thick cover on top. Laced well despite the diminishing head. The aroma is giving off some nice roasted characters with overtones of chocolate, coffee and crystal malts standing out. Backing them up are softer hints of molasses, clove, oak and wood fire. In the mouth it’s oily with mild carbonation. Medium-full body. What we have found from reviewing a few of this breweries range is this repetitive funky tartness. It’s almost a sour initial flavour in their beers. While in some cases this works well, we feel it shouldn’t be an umbrella addition to all of their beers. The mid-palate though, does save it with the emergence of roasted espresso, cocoa and subtle hints of booze (8.5%) and licorice delivering a roasty finish with hints of dark fruits and peat. A decent bitterness holds up throughout the whole palate giving a much needed boost to the depth of this stout. Although this has the platform to be a good stout, it just lacks the final punch. This tart, sour flavour these guys have in their beers has to be better selected, and essentially, used for the right brews such as wild ales, saisons, lambics, even their own smokey red ale, but not for a stout. Quite frustrating, because this could have been a good beer.