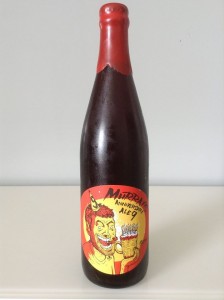 This Barley wine marks the 9th year of class brewing by Murray’s Craft Brewing Co. An institution to us, as it is a brewery we have visited probably a dozen times. It has actually been a long time coming because this is the 2014 anniversary ale and we carefully cellared this for about 6 months.

Very regally capped off by wax, we toiled through and finally popped off the cap and served into a snifter glass. Our eyes are met with a deep copper appearance. Crowning it is a short beige head that eventually settles to a fine collar without much lacing. Since the new head brewer has taken the reigns there has been a very welcome introduction of US-inspired beers packed full of US west coast hops such as Fred, Skully and the latest session IPA…Ed. This barley wine seems to have similar inspiration with a slightly hop-forward aroma that mainly consists of grapefruit, passion fruit, toffee and residual sugars. What we love about this style is it’s similarity to wine so as it warms we pick up these faint undertones of caramelised pear/apple, booze, dark fruits and wood. Perfectly complex. The mouth feel is silky smooth with an oily texture. Carbonation is low and the body is medium. Quite an interesting flavour profile here, it doesn’t really unfold in stages….it’s more like a burst of alcohol warmth, toffee, caramelised sugars, rock melon and apricot that initially takes hold of the taste buds and refuses to leave. The only noticeable shift is a slight alcohol warmth on the rear-palate…bringing with it really good length. As most barley wines do, this monster offers a slight head buzz and this one is weighing in at 10% ABV. Here’s cheers to 9 years!! And hopefully there are many, many more to come.