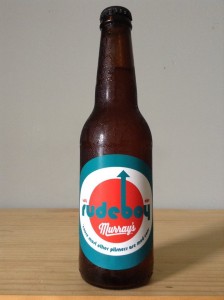 “Rudeboy is Murray’s interpretation of Pilsner made vaguely in the Czech style but with a New World twist. It pays homage to European brewing tradition using the old school lager brewing process of cold fermentation and extended conditioning periods, but the extensive late hopping takes this Pilsner in its own direction.”

Served in a footed flute glass. Rudeboy pours a slightly hazy pale golden hue with a finger of off white head capping off. It settles to a wispy film that weaves a wet and streaky lace as it ebbs.
The nose is lovely, light and crisp, really showcasing those luscious green NZ hops. Wafts of zesty lime juice, guava and vinous herbs are also pushing up in support. Beneath it is the clean cereal malt base that works itself in beautifully and hands the aroma a good contrast. Terrific stuff here from Murray’s.
As expected the texture is light and flowing but slightly beefed up with a medium body. Co2 is moderate with just the right amount of bitterness.
Nothing rude in flavour either – it opens up with a super clean grassy/herbal hop character that reveals traces of cereal malt laced through. It holds its shape quite well as it surpasses the mid picking up suggestions of citrus as it leads to a crisp, clean and mildly dry finish. Length is reasonable, refreshing green and grassy on the back palate.
We couldn’t have chosen a better beer for this scorching hot Sydney summer day if we tried. The crisp and refreshing hops paired with the clean, dry malts are just what the doctor ordered. Cracking beer….we’ll be making a return to this that’s for sure.