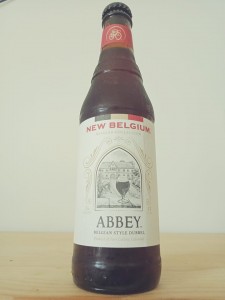 “The story of New Belgium begins with an abbey: Not only were Belgium’s monastic beers the inspiration behind our Colorado brewery, but Abbey, a Belgian-style dubbel, was one of the first beers we released way back in 1991. Since then, it’s become our most award-winning offering. Sip Abbey, and sip New Belgium’s tradition.”

Appearance: Mahogany with ruby red hues. We get a full gaze through the beer when held to the light. Minimal head settling to a halo with some patchy lace as we imbibe.

Aroma: Picking up a lot of the Belgian yeasty qualities such as banana runts, clove, pear/apple and peppery phenols. Moreish wafts of milk chocolate, caramel and dark fruits also getting amongst it. Maybe just a flutter of nutty malt, coffee and bubblegum as well. Love it…very conventional.

Flavour: It comes on with a fusion of Belgian yeasty notes and caramel/toffee sweetness. Dark fruits like raisin, plums, fig etc through the middle picking up a kind of banana split-like flavour as it rolls on. A little cameo of spice, chocolate and cocoa before a yeasty finish is dressed up with hints of toasty malt and coffee.

Mouthfeel: Pretty well rounded. Rather smooth and silky with medium body. Just the right amount of co2 to give it a lift. 7% AbV nicely tucked away.