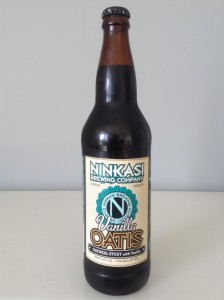 “A delicious oatmeal stout with just enough hops to balance the copious quantities of dark roasted malts, oatmeal for a creamy smooth drinkability, and whole vanilla beans for a rich complexity. To achieve this higher level of decadence, we added in whole vanilla beans to the final stage of conditioning – the same process we use to dry hop a beer”.

Normally we aren’t this slow to initiate our first review of such a good brewery, and for that we are kind of bummed out. Although, in saying that, we have a back order of a couple more on the way so we intend on catching up. Not only that, we’re sure they will impress. Served in to a beer tulip. Pouring blacker than the ace of spades and just managing to arouse a heavily tanned one finger head, the foam steadily reduces to a fine layer on top with reasonable lacing to show for it. Prepare for an onslaught of the senses because this stout is providing some rich, roasted and heavily dense attributes on the nose. Leading the assault is a tussle between heavily roasted malts and sweet, sticky molasses. Backing up is a firm presence of dark chocolate, milo, treacle, vanilla and of course, oatmeal. There is a certain smoky undertone too, we’re picking up a slight scent of charred wood and ash that rounds off this ominous aroma. In the mouth it’s surprisingly lighter than we were expecting. The texture is oily while the carbonation levels are obviously mild. There is a pronounced bitterness (50 IBU) that graces the tongue initially. Following is a sweet, medicinal-like flavour that portrays itself almost like molasses as a heavy roast kicks in just short of the mid-palate. After a few more sips and much deliberation we come to agree that the mid displays the oatmeal quite firmly as we pick up a starchy flavour, something similar to potato. A hint of milky lactose/vanilla picks up from the mid and continues forward, finishing roasted and bitter with a lengthy dryness to the back end. Wow. What is really impressive is how we have completely forgotten about the 7.2% ABV. Not to mention the overall complexity and control of the flavours. Good beer. A real winter warmer.