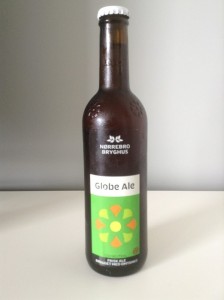 “Nørrebro Bryghus has launched a new beer, Globe Ale, which is Denmark’s first carbon neutral beer. The new beer comes in natural continuation of the brewery becoming – also as the first in Denmark – carbon neutral on its energy consumption as of 1 March, 2009”.

Once again, here is another Norrebro beer we first tried years ago and fell in love with. It’s taken us some time to track them down but we eventually found them. Poured into a shaker glass the appearance displays a clear amber orange with a short 7-8mm white head that disappears quite quickly, forming a halo around the edge of the glass. Laced poorly. Clean and refreshing citrus aroma with hints of stone fruit, peach, lemon and some grainy malts. A lovely caramelized viscosity comes through as well bringing with it a gorgeous toffee sweetness. Mildly carbonated with a light and creamy mouth feel. Upfront the palate displays hints of grains and biscuity malts. A slightly fruity/hoppy mid-palate is developed but unfortunately it drops away to a short finish with a delicate lingering bitterness on the tongue. It’s 4.8% and along with almost every Norrebro beer it’s so damn sessional. The only down side is it’s a bit too thin. Regrettably this brewery is very hard to get beer from, we don’t know why because this stuff is delicious.