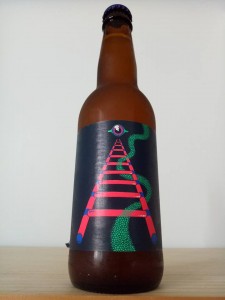 “The wort of this beer looks radio active. Pale, wheaty and green tinted from a post boil hop burst. After a short and efficient fermentation we dry-hop it as many times as it takes and carbonate it softly. We love brewing beer, thinking about beer, dreaming about beer, talking about beer, breathing beer, changing beer, exchanging beer etc. Chill it perfectly and crush it deductively.”

Served in an IPA glass. It pours a cloudy and somewhat milky straw golden hue with a frothy two finger crown. Head retention is good and we see a wavy lave pattern as it ebbs.
Interesting aroma. Smells fruity and piney but also kind of creamy. Definitely get orange citrus upfront, mango, pineapple, subtle grapefruit and subtle dank pine notes. The wheat component is delicate, actually quite hard to pick up but it does come through dry and somewhat bready. Picking up some herbal scents, a bit of spice and this unique ice cream character – reminds us of mango Weiss bars.
Just getting the typical IPA characters on the palate – a nice little fusion of citrus and tropical fruit, pine and grassy/herbal hops. Again the wheat is super subtle, we’re getting more of a light pale malt coming through with grainy and semi sweet honey notes. Subdued fruits and pine return before its rounded out by mild citrus, pine and grassy hops.
The texture is drying and slightly powdery. Medium body and co2. Very well concealed ABV (7.2%), so to is the bitterness.
A little underwhelming we must say. It almost has a NEIPA feel to it with its hazy appearance, low bitterness and high fruity hop content but it just doesn’t seem to hit home for us. The wheat component is too subtle and it just lacks overall excitement. A rare miss from such an esteemed brewery.