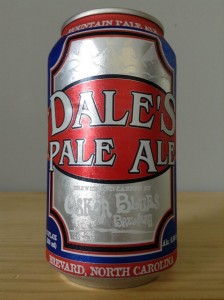 “THIS VOLUMINOUSLY HOPPED MUTHA…delivers a hoppy nose and assertive-but-balanced flavors of pale malts and citrusy floral hops from start to finish.

Served in a shaker glass. Dale offers an amber hue with a dash of candy red laced through. A two finger head took shape on top before it reduced to a fine overlay that dispenses a healthy webbed lace trail on the glass.
The nose, even though somewhat restrained, is hop forward and clean with soft piney notes, grapefruit, orange, grassy hops and marmalade leading out. The malt is quite dry and doughy and balances out with wafts of white bread and toast. It’s not a mind blowing aroma by any means but it has us interested.
The mouth feel is full-ish with a reasonably chewy texture. The 6.5% ABV could very well place this in to the IPA category as it comes through a bit too aggressively for a pale ale. The 65 IBU is also pretty heady but it does restrain itself a bit better.
The front palate sees a fair bit of aggression from the booze and hops but it softens to reveal the mild pine and citrus early in the mid. Hints of caramel and biscuits enjoy a short cameo before an assertive bitterness ushers in a dry, grassy and citric finish with reasonably good length on the back palate.
We’ll admit that we aren’t completely blown away. It’s a bit boozy and full on for a pale ale but it can work in two ways. For the hop head who wants a somewhat sessional beer with balls it’s a good choice but for the punter who wants an easier, more sessional ale it isn’t. We’re still trying to work out how it isn’t an IPA?!