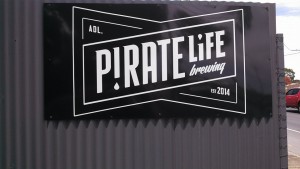 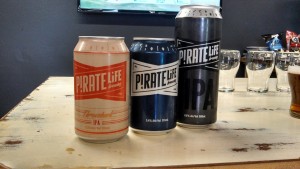 Our first ever visit to the City of Churches provides not only an eventful brewery tour but more breweries than we could poke a stick at. Throw in a few really good brewpubs and bars as well and it’s agreed – Adelaide is certainly a city that loves its craft beer! So with all these options now spoiling us for choice we thought we’d firstly head to the brewery that has caught our eye of late, and that is Pirate Life Brewing. Situated on South Rd, about a 10-15 minute drive west of the city (or about 45 minutes walk, which we found out after was much further than we thought) we were surprised by what we were met with. As the cellar door had only opened 5 days beforehand, beer lines were still to be plumbed so it was only cans on offer. We’d have to admit we were spewing but credit must go to our host, Ed, who was a great bloke and he assured us that they were as fresh as beer from the keg. They are only a very new operation so the 3 beers on offer were the Throwback IPA, which is a 3.5% ABV session IPA which lives up to its name extremely well. It’s super sessional and full flavoured with a big fruity aroma. The Pale Ale followed, and again we were pleasantly surprised by the full flavour and character of this beer. An American inspired ale with a big hop presence on the nose and palate. We finished on the big bopper – the Imperial IPA – served from a 500ml can and weighing in at a hefty 8.8% ABV so it’s aggressive, hop charged, fruity and simply delicious. That good we took an extra 4 pack for the road. There is definitely potential for a really good brewery here. Maybe on our next visit they’ll have their taps pouring their standard range plus a few seasonals 🙂