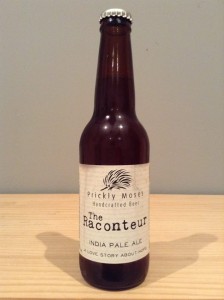 “The Raconteur IPA tells the classic story of American India Pale Ale with hops the protagonist. A hop driven beer in every way, hops are added throughout the entire brewing process from the mash tun to the kettle and even the fermenter. The classic ”Three C’s”combination of Centennial, Chinook and Cascade hops balance the caramelised malt profile in a way sure to give you a story with a happy ending. (6.4%)”

Served in an IPA glass. The appearance offers a deep amber/almost copper complexion with a gushing three finger head forming on top. The head is retained beautifully, stubbornly holding and maintaining a thick overlay that weaves a thick, sudsy lace trail down the walls of the glass. Looks fantastic. Certainly smells like an American IPA so that’s a good start. The brewers have used a tantalizing trip of ‘C’ hops including centennial, cascade and chinook so lifted aromas of tropical fruit, pine and some herbaceous notes fill the olfactory’s initially. We also get a slight earthy hint with lashes of citrus cutting through. There’s also a light floral undertone that imparts a mix of rose petals and orange blossom as well. Some nice aromas in here. The beer glides over the palate quite easily providing a slightly dry but smooth texture. Well carbonated and the 6.4% ABV adds a touch of warmth as the restrained 72 IBU develops a mild bitterness in the swallow. Tropical fruits, pine and citrus fill the mouth upfront. We notice a bolder malt profile in flavour as opposed to the aroma as these sweet caramel and or toffee characters bridge the mid. The delicate warmth from the booze and the mild hop bitterness combine to deliver a dry and fruity finish with lingering pine notes on the back end. Pretty good. For a middleweight IPA she packs a solid hop punch in aroma and flavour and is countered by a discernible caramel malt sweetness on the palate. We recently visited this brewery and tried it on tap and we’re confident in saying that it tastes exactly the same, if not better. Decent drop.