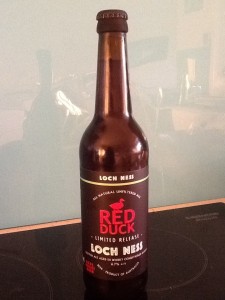 “Red Duck Loch Ness is a strong Scotch ale, with a complex malt base, low hopping, extended boil time for more caramelisation, and matured in oak barrels that were whisky conditioned (with a very good single malt) for 6 months. Loch Ness has soft oaky, whisky notes, rounded malty characters and a subtle caramel bitterness. Only 400 litres produced, so very rare, and special. Our first batch of Loch Ness was released in the winter of 2010, to much acclaim. Its taken this long to get around to brewing another batch!”

From the boys at red duck, comes their limited release scotch ale aged in whiskey barrels for 6 months. Only 400 litres produced! Pouring a gorgeous amber reddish colour we are excited once we get such complex aroma from the nose. Roasted malts, a tartness that is subdued from the minimal hops used, mild sweetness from the caramelisation (stemming from the extended boil time) and that typical whiskey like flavour from the oak barrels. There is also a slight smokiness. There is no head and a smooth, non carbonated mouth feel. This brew sits at 6.7% and it’s flippin’ bang on. It’s like an extremely crafty version of Toohey’s old, which is the best out of that crap bunch of commercial Australian beer. The smoothness of this drop combined with the complex, peaty-like flavour is a real treat. We respect these guys at red duck because almost all of their beers are brilliant. Their sheer range of brews are extensive. We picked this up at the oak barrel in sydney. Very good.