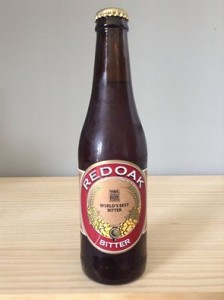 Ask any Aussie which country is always the most pleasing to beat at anything and the odds are that most would say the Poms! The main two battles would have to be the Ashes (which we regrettably hand to hand back this year) and the Rugby World Cup (which the Wallabies just eliminated them from last weekend, woohoo!!) But it must really irk them, and this gives us immense pleasure, when we brew their own traditionally English beers better than them! This Bitter was awarded best Bitter at the World Beer Awards so let’s hope the beer tastes as sweet as victory!

Served in an English pint. The clear golden golden/amber pour arouses a gushing four finger head that takes an age to reduce, all the while omitting thick and sudsy lace trails as it ebbs. As it is still quite heady the aroma initially offers up a slightly skunky (dark bottle so we doubt it’s light-struck) character. As the head fades it converts in to more aromatic notes of tropical fruit, bready malt, caramel, grassy/herbal hops and a touch of orange tang. In the mouth it has a frothy texture which is boosted by a high level of Co2. Bitterness is mild along with the ABV (3.5%). Quite light on as well. The palate is met with a tangy/tart citrus flavour on entry. A dash of tropical fruit and a hint of caramel sweetness carries forward through the mid and rounds off with a soft, slightly dry, slightly bitter finish. Well, it certainly has session ability on it’s side, but other than that it’s a tad insipid and tiresome. These guys have to start bottling some of their better beers. Bottling only three or four out of a range of about twenty is just simply not enough. These guys have so many other better beers. Get bottling!! 😉