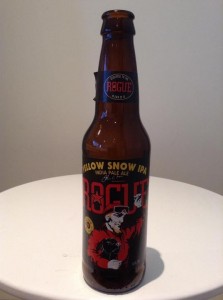 “Yellow Snow IPA was originally introduced for the 2000 Winter Olympics in Salt Lake City. Yellow Snow is Rogue’s tribute to winter sports everywhere—downhill skiing, snowboarding, cross country, ice hockey, ice fishing, snowmobiling, and even curling”. It’s long been the unwritten rule on the mountain to never drink the yellow snow….but we thought this one could be the exception. Served in an IPA glass. The hazy honey-coloured appearance is topped off by a short one finger cap that lasts the distance. The head retains quite well which omits these lovely lace trails left clinging to our glass. We’ve come to realise that most rogue IPA’s don’t present with the big fruity hops most come to expect with an American IPA. It appears to be the case here as the nose takes on a more malt-dominant role with light florals flowing through. We certainly detect a muted suggestion of citrus, marmalade, subtle grapefruit and freshly chopped wood with a pleasant malt sweetness rounding it off. Well, it is an IPA made for winter, so in that respect it smells pretty good. In the mouth it’s full-ish with a frothy texture. The carbonation is medium with an extremely grippy bitterness (70 IBU) on the back of the tongue. Well, those misconceptions about this not being hoppy are totally out the window. Big, aggressive hop bitterness on entry slowly eases and develops into an acidic grapefruit dryness through the mid. A tangy hint of orange comes through as a touch of biscuity malt tries to cut though the bitterness. Finishes dry with a sharp alcohol (6.5%) astringency that’s left a little stranded on the back end. Average. Geez, we could think of hundreds of better IPA’s. We feel it’s highly unbalanced and a little erratic. We aren’t fans of this one.