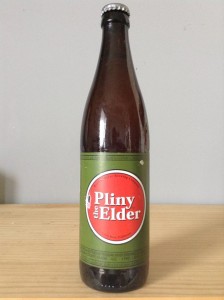 “Where did we come up with this name? Back in the year 2000, our friend, Vic Kralj, who owns the Bistro in Hayward, California, decided to have his first ever Double IPA festival. Vic invited 10 breweries, 6 of whom (including us) had to brew something special for him since we had nothing that would fall under this style category. Vinnie had made a Double IPA at Blind Pig in 1994, but was not brewing one at Russian River Brewing at the time. He had an idea for the recipe, but not a name. After much research in beer books, brainstorming, and deliberation, we came up with “Pliny the Elder”. Pliny, the man, lived in the first century- 23 to 79 A.D. According to our brewing references, he and his contemporaries either created the botanical name or at least wrote about Lupus Salictarius, or hops, currently known as Humulus Lupulus. That was a very early reference to an important part of any Double IPA! Pliny the beer has now become one of our flagship brews!”

Served in an IPA glass. Pliny pours a bright golden amber with a foamy two finger head forming on top. The head retains incredibly well and weaves a healthy lace as it ebbs. The first whiff of this coveted IPA has everything we’ve waited years to experience – its big, bold and bitter with grapefruit, orange peel, pine resins, hop oils, subtle peppery spice and a faint suggestion of bubblegum. Although it comes on hard with its West Coast hallmarks there is a lovely biscuity malt sweetness that takes the edge off the bitter hops. It may be big and bitter but there is an excellent balance on the nose as well. So far it is certainly living up to its cult-like status. In the mouth it is remarkably smooth and accommodating. The texture is light and oily and the 8% ABV is so well disguised you’d be excused for thinking it was around 6%. Co2 is spot on, adding a nice overall vibrancy to the feel of the beer. The flavour literally follows on from the nose. Upfront we get grapefruit, pine resins and juicy citrus notes. The 100 IBU gets introduced through the mid as flavours of hop oils and sweet malts lead in to a long resinous finish with hints of grassy hops on the back end. Brilliant. Well worth the two and a bit year wait. It’s clean, refreshing, silky smooth, superbly balanced and down right delicious! It was bottled on 12/10/16 so it’s fresh as f#*k as well. The only downside is that we don’t have any more

ah well at least that’s one we can tick off the bucket list. Big shout out to our good mate JD for muling it back from the States for us! Amazing stuff.