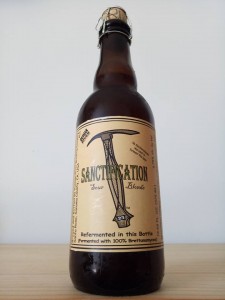 “Technically, this is neither an ale nor a lager. The base recipe is for a Golden Ale, but we do the primary fermentation with 100% brettanomyces. The brett gives it some sour notes but not as much as if it had been aged with lacto and pedio. It’s rather refreshing on a warm day!”

Appearance: Pale golden hue which caps off with a wispy head that instantly peels back to a ring. Minimal lace as it ebbs.

Aroma: It certainly has a dominant funky Brett scent but it’s well tempered. The usual suspects i.e bitter/tart citrus (lemon, lime, grapefruit), spice and aged vinegar are there but with a somewhat earthy barnyard character to it. Hints of that sugar crusted candy as well – meringue, froot loops and lemon drops. Fine aroma.

Flavour: Brilliant transition from the nose. It’s funky and sour but that’s mostly from the tart lemon and vinegary notes. It softens in to a fruity middle, but not in the fresh way, more artificial-like as it hints at fruit tingles and candied citrus. Hints of Belgian yeast esters, pear/apple and earthy spice round off on a slightly dry and lengthy finish.

Mouthfeel: Light and fizzy with a rather mineraly texture. Booze (6.75%) is well hidden. Slightly acidic.

Overall: There’s something here for everyone. It is 100% Brett fermented so the sourness does come on strong but it tapers off nicely for the more novice sour drinkers (like us!).