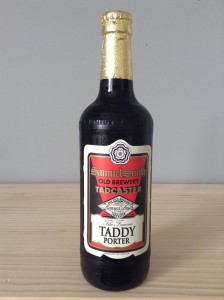 “Brewed with well water (the original well at the Old Brewery, sunk in 1758, is still in use, with the hard well water being drawn from 85 feet underground), malted barley, roasted malt, yeast and hops. Fermented in ‘stone Yorkshire squares’.”

We guess it just makes sense to go for a beer that’s brewed in the same country it was originated from. West Coast IPA – USA, Belgian Dubbel – Belgium, Saison – France and the humble old Porter from the UK. This is not to say other countries don’t do it better (some actually do) but it’s nice to crack a real traditional beer sometimes. On we roll. Served in to a beer tulip. The jet black pour arouses a fizzy two finger head that steadily deconstructs and retains about a 2-3 mm cap. Lacing is thick, blotchy and plentiful. The nose is a lot sweeter than we were expecting. A somewhat port-like complexity offers viscous toffee, ripe cherry and molasses. Deeper down and we start getting hints of dark chocolate and fruit cake which really compliment the plummy overtones. A touch of coffee in here too. Good depth. In the mouth it’s light on with an oily texture. Medium-full body with mild Co2. Maybe a suggestion of hop dryness there at the back end too. It’s a full on malt assault upfront, plenty of rich roast, coffee, chocolate and cocoa with that firm molassesy pronunciation. As the fore flavour tapers off the mid reveals a boozy port-like note (obviously without the booze level which is modestly set at 5% ABV) that rounds out with a clean and roasty finish. Length is quite short. As much as this looks like your typical traditional English porter it actually isn’t. The hefty sweetness on show sort of shifts the focus away off the usual traits of roasted malts, nuts and chocolate and puts it on this kind of porty/molassesy/viscosity. Nice Porter.