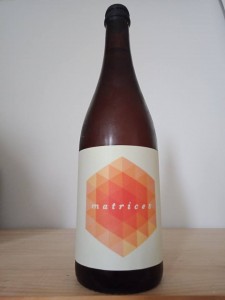 “Side Project’s Cory King and the brewers here at SARA chose several strains from East Coast Yeast, in addition to both breweries respective house cultures, and elected to ferment individual barrels with each, with the ultimate goal of blending the entirety into a final, mature, bottle conditioned Saison. The result is wonderfully complex and the perfect illustration of the shared philosophy between both us and Side Project.”

Appearance: Straw gold with a faint haze. It doesn’t really produce much head with it retreating to the rim but weaving a fine lace as it ebbs.

Aroma: There’s definitely a sour aspect to it albeit subtle. Picking up soft Belgian yeast tones along with straw, barnyard, candied lemon, banana runts and a somewhat chalky vanilla (from the barrels perhaps?). Also displaying traits of a Belgian tripel with its hint of apple and a kind of dry malt base…becoming a bit wheaty and grainy over time. Quite a complex number.

Flavour: Follows on from the nose – a nicely balanced ratio of sourness to sweetness with undertones of yeasty spice and pear/apple at its core. Straw, farmyard grains, candied lemon and subtle oak character roll through the mid and finish with an interesting set of flavors including white grape juice, herbs and rosewater.

Overall: Very interesting. It’s certainly not short on character it’s like a saison, a sour, a tripel and a farmhouse ale all rolled in to one. We already knew SARA were masters and we expected as much from Side Project. They both delivered here!