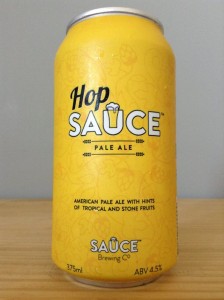 “Our flagship Pale Ale. A lovely golden colour, citrusy with hints of tropical and stone fruits. Made with US & Aussie hops. An easy drinking sessionable pale ale at 4.5%.”

Served in a shaker glass. Hop sauce pours a solid amber complexion with a sturdy two finger overlay. The head peels off about a cm and retains a thick blanket for the duration of the beer. Laced healthily.
We’re getting a bit of a mixed bag on the nose. On one hand there’s some nice lifted citrus and stone fruit notes but on the other we’re detecting a bit of a skunky/sulfuric scent. From memory that’s usually an effect of light-struck beer but it was poured from a can so it doesn’t make sense. Quite frustrating because underneath there’s some lovely fruit aromas happening. Just can’t get past this bloody skunky character.
Anywho we move on to the mouth feel where the texture is light on and a tad too thin. The Co2 does add a bit of zing as the 35 IBU provides a mild initial bitterness.
An upside is that the skunky notes on the nose don’t carry in to the flavour. It is slightly acidic on the front palate with citrus and a nice firm bitterness moving forward through the mid. We pick up hints of peach and under-ripe pineapple that lead to an ultimately dry and citrusy finish.
We’re not going to beat around the bush here we aren’t that impressed. The skunky nose, the thin-ish texture and the lack of pizzazz has us unconvinced. Although, the foundations of the beer aren’t too bad. It’s also pretty sessional and the minimalist design on the can is eye catching as well. Ah well, let’s hope the mega hop sauce is better.