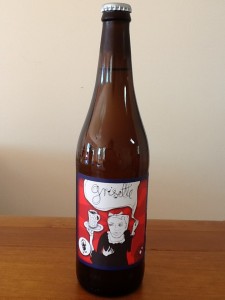 The gypsy brewers from inner western Sydney return with this seasonal release – a dry, refreshing, sessionable farmhouse style Saison with a new world twist. It has a malt profile consisting of pilsner, British pale, rye and oats alongside citra and styrian golding hops. It’s unfiltered and unpasteurised.

Poured into a pint to take all the 640ml goodness of the bottle, you get a shandy-like aroma, almost vinous like gooseberries. Although when you smell the aroma out of the bottle, you immediately get a lovely tropical fruit aroma from the citra hops. Interesting. The pour is a Pilsner like hazy hay colour (like a stone and wood pacific ale) and there is plenty of carbonation, like what a coopers sparkling would produce. The is a bubbly white head that fades pretty quickly to just leave a sudsy rim around the glass. First sip is certainly different from the initial olfactory hit out of the bottle. There is a drying, carbonated hit on the palate and the spicy rye malts come through. We lose all the tropical fruit hops on the palate, and get more bittering, ale-like hops from the styrian that lingers on the palate. Maybe some pear flavour coming through. 30 IBU stated on the bottle and that seems fair. Body is light to medium, and for an alc vol of 4.6% it certainly has loads of flavour. The main features of spice and bitterness with the addition of Belgian yeast means this beer is similar to a Saison. We think the brewers have done a good job here. We not so sure about the sessional aspect as after this bottle we can certainly feel a buzz, but we not complaining. Overall, it’s an enjoyable beer and it ticks the boxes.