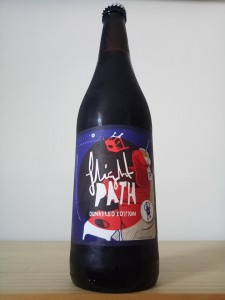 Appearance: Deep chestnut brown with a two finger cap resting on top. The head peels off but still manages a healthy lace as it ebbs.

Aroma: Intriguing to say the least. Certainly getting a lot of the coffee coming through with its alluring roast and subtle bitterness. It actually works particularly well with the malt sweetness, kind of off setting it if you will. Undertones of earthy truffle, cocoa, charcoal and salted caramel filling it out.

Flavour: Nicely dominated by the coffee although it’s still well tempered and allows a lot of the malt sweetness to creep through. Becoming more earthy and slightly roasty as it rolls in to a somewhat muddled finish with a dry toasty note enduring on the back end.

Mouthfeel: Nice and slick, medium-full body with a dryness developing late in the piece. Nicely carbonated.

Overall: What a mish mash! It would make sense though, the beer is literally a blend of their Autumn and Winter seasonals spiked with a good helping of cold drip coffee. Can’t say we’re totally blown away but it’s a reasonably good offering.