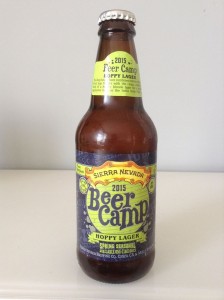 “Last summer we teamed up with San Diego’s Ballast Point Brewing & Spirits for a hop-head twist on a crisp lager. We remixed this encore which is loaded with whole-cone hops in the brew kettle and in our Hop Torpedo to deliver a bold aroma backed by smooth malt flavour. This hop-heavy beer combines intense citrus and floral hop flavours with the clean, classic malt body of a hearty blonde lager for a crisp but aggressive take on the India style pale lager”.

Served in a shaker glass. The slightly hazy golden pour generates a one and a half finger cap which steadily deconstructs, settling to a fine film over the top. The head hasn’t retained remarkably well but it’s managed to draw some wavy lace patterns as we imbibe. Certainly a hop driven aroma here. Any trace of lager is all but expelled….not saying that’s a bad thing though. There is a distinct fragrance we just can’t seem to identify though, in the background there is a generous amount of hop resin, citrus, passion fruit and pineapple against a crackery/biscuity pale malt base but it’s this artificial, almost candied scent of either kiwi fruit or honeydew. It almost comes off as a blend between lemon and eucalyptus at times. It’s got us stumped. In the mouth it’s nicely weighted with a smooth, dry texture on the tongue. Co2 levels are about moderate with a conservative but evident 55 IBU, offering a mild bitterness on the palate. Malts are a little more pronounced in the flavour as a hint of rice crackers acts for the first lager component. This certain fruit we couldn’t identify on the nose also makes an appearance through the mid as the hop bitterness cuts through. Herbal/resiny hops carry forward on to the dry, citrusy finish. The “India” character is definitely working its magic late as a firm dryness is well drawn out on to the back end. What has been done really well is the masking of the 7% ABV. Not to be detected in aroma and only very subtle in flavour. Points for originality (we still can’t decide on what the mystery fruit is). It is, though, lacking that wow factor and essentially we’re just not completely sold on this. Not a bad brew, although we have certainly had better from these world leaders in craft brewing.