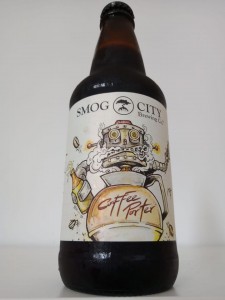 “Easily described as a COFFEE beer rather than a beer with coffee. This robust porter is aged on freshly roasted, freshly ground, organic Groundwork® coffee which enhances the flavors of chocolate, roasted malt, and of course coffee, already present in the beer.”

Appearance: Black with faint dark red edges. A thumb of brown head rests on top but it quickly disappears and manages a blotchy lace trail in its wake.

Aroma: One sniff and it sends the eyeballs rolling! This one is interesting though…we find most coffee Porter’s (or Stouts for that matter) have either a sweet or bitter coffee profile. This one has a bit of both. Then there is this aggressive roast component which hands the nose big notes of burnt wood, ash, charred malt, licorice and 100% dark chocolate. That is one fierce smelling coffee Porter.

Flavour: Interesting. In the way that the coffee somehow drops off a bit but is easily replaced by the heady roast and char characters. There is still a fair amount of coffee here though – coming through from a bit of a raw bean angle if anything. It doesn’t really sway far off this line as it finishes nice and roasty with raw coffee and char on the back end.

Mouthfeel: A little bit lighter than we’d prefer but then again it is a Porter so it’s naturally going to be a bit more approachable. Low-ish Co2, well placed 6% ABV. Not bad.

Overall: Not an overly memorable coffee Porter but in saying that it’s got some real strong points…the aroma being one of them. We remember visiting this brewery and being super impressed by the sours. Shame the dark beers don’t offer the same calibre.