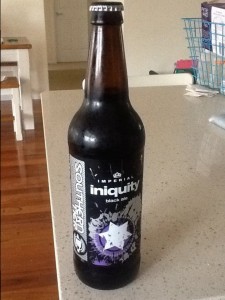 We picked up this bottle from the brilliant lill’ bottle shop in Berry NSW, where under the guidance of the knowledgable owner Justin, stated that this imperial black ale is an absolute must to try for the craft beer lover. Well..how could you not. Like waving a red flag to a bull. This beer is called ‘iniquity’ (meaning opposing goodness). Simply, it means that this beer is contrary to what you would expect from an IPA. It is an ale, as black as the night! We are a little confused though..is it an ale or an IPA? Anyway, who cares let’s roll on.

Served chilled in a tulip glass, it is indeed black as black can be, but has a beautiful dark ruby character when held up to light. There is a creamy 10 mm head with small carbonated bubbles, which fades leaving patchy bubbles and  a rim of tightly packed 5mm bubbles. The aroma is insane. Like a juicy fruit salad, intermixed with roasted malts, and some mild coffee. First mouthfeel is divine. Very smooth ale like flavour at forefront on the palate, which then slowly increases to a well contained bitterness at the backend. More roasted flavours like espresso, mild ash, very mild dark chocolate and its wrapped up in the 9% alc vol booze hit. This is not overpowering though but definately present. It’s amazing the difference between the initial sweet, juicy fruit like aroma and the more bitter, mild drying hit of the hops in the mouth. We note the use of kettled chinook and cascade hops, willamette hop back, and dry hopped cascade and centennial hops. So complex. We get that lovely citrus, grapefruit hit on the palate. More subdued pine. It is so damn floral and this must be the willamette. We love the fact that this immensely smooth drop has a medium body and is not too heavy, has mild carbonation so the ale-like qualities shine, and has this artistic like lacing down the glass like it’s been painted. It’s a lovely black ale, which could be mistaken for a black IPA due to the hop dominance. Such a balanced, smooth imperial ale. Well brewed and many thanks has to go to Justin because he is bang on. This is a superb drop and has to be consumed by anyone interested in craft beer. Good luck finding it!