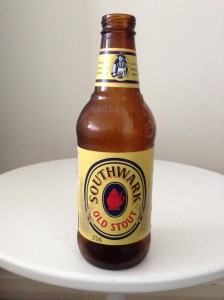 “Brewed in the style of the old London Imperial Russian stout to a recipe perfected over 40 years ago, the roast coffee and almost port-like characters make it an excellent nightcap and winter warmer. Voted Champion Stout at the 2001 Australian International Beer awards having previously been Grand Champion Beer in 1988 and 1991.”

A very traditional-style stout. There aren’t many more bottle shops where you can find these but we picked it up from Bottl’o’Brien’s in Cronulla, Sydney. Served in a beer tulip the jet black pour is offering some attractive ruby red highlights. Capping it off is a creamy, light brown head that maintains well allowing some healthy lace trails. Quite a smooth aroma, no harsh alcohol sting or overly bitter espresso notes just even wafts of coffee, dark chocolate, caramel and subtle spice. We can’t help but pick up a strange tartness, maybe lemon? A bit strange for a stout. In the mouth it feels creamy with a decent body behind it. Mildly carbonated. The main flavours coming forward are the roasted malts, coffee and chocolate notes. Nothing out of the ordinary for a stout. We did notice an initial bite which would probably come from the 7.4% ABV but has a subdued sweetness to balance. We get a slight peaty flavour through the mid which is then followed by the lingering creamy, roasted finish. To sum it up, it’s not an overly adventurous stout but we did enjoy drinking it. Not a bad offering.