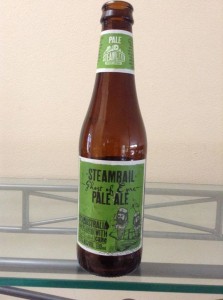 If you were to see our first review of this brewery (the golden ale) we briefly wrote about our confusion over whether this brewery was contract brewed or not. A little deeper research uncovered a statement saying this brewery is contracted to brew beer for liquor land (an Australian bottle shop). That would explain a lot.

Anyway, onto the beer. Served in a shaker glass the transparent golden pour constructs a white 1 finger head that settled to a halo around the edge of the glass. Mild lace. To be honest, this pale ale hasn’t strayed far from the golden ale with the only difference being a touch of honey sweetness and a very mild grassy hop note. The same light floral scent with subtle stone fruits seem to be this breweries blanket attribute. Mouth feel is slightly oily with mild-moderate carbonation. Body is average and again, similar to the golden ale the flavour profile is missing in action. Upfront we detect a mild bitterness with a faint taste of grassy hops and grain that is monotonously carried all the way through to the finish. Way to one dimensional and utterly boring. 4.5% ABV. As far as pale ales go, this is one of the worst we’ve ever had. Completely lacking in all departments. Even for the cheap price we won’t be returning.