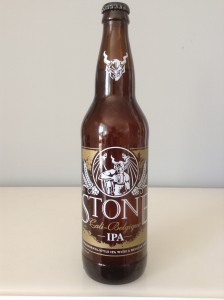 “This beer is indeed a complex and surprising combination of flavors, but behind the fancy title is simply delicious Stone IPA dressed up in new Belgian duds. The addition of a carefully selected strain of Belgian yeast adds unexpected layers of flavors and aroma, providing a deliciously funky overtone to the hoppy brightness you already know and love as Stone IPA. Think of it as an otherwise identical twin to Stone IPA that was raised in a Belgian culture. Literally”.

Served in an IPA glass. The only slightly hazy straw-golden pour whips up a short, fluffy white head that maintains quite well, eventually settling to a fine layer on top. Nice wavy lacing is being strewn down the walls of the glass. Considering it’s the 26/7/15 we’d like to ignore the “enjoy by 8/4/15” that’s printed on the shoulder of the bottle but it’s hard not to when the Belgian aromas are a lot more dominant than the fruity hops. We get strong wafts of clove, candi sugars, banana lollies, bubblegum and caramel which really drown out any tropical fruit aroma. We keep getting a subtle undertone of smoked malt too. Strange. In the mouth it’s full-ish with a frothy texture. The Co2 levels are quite high. The 6.9% ABV is very well hidden, only giving away a soft warmth on the back palate. The 77 IBU is nicely drawn out, really developing later in the flavour profile. The palate enjoys a much more balanced approach though. Upfront we get a cameo of yeasty Belgian candi sugar but it’s aggressively overtaken by a citric grapefruit bitterness. A delicate injection of spice sways it back in Belgium’s favour as the dry, bitter finish offers a tip of the hat to the American IPA. A nice fusion of bubblegum sweetness lingers nicely on the back palate, promoting that good balance between Belgian yeast and American hops. Initially we thought the Belgian to American ratio was heavily in Belgium’s favour, and the aroma certainly reflected that sentiment. But the flavour was definitely a tight tussle between the two, really showcasing the idea behind this brew. In the end, we’ve had much better beers from Stone but its not a bad beer at all.