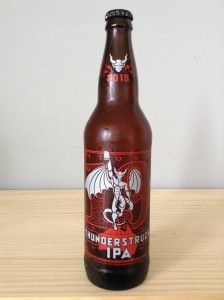 “Our 19th anniversary release brings the boom, delivering it to the palate in a voluminous, hop-driven thunderclap. This double IPA owes its considerable oomph to a quartet of Australian hops—Topaz and Galaxy, plus two newcomers, Ella and Vic Secret, that scored impressively in test batches. We’re also applying the all-Aussie theme to the malt bill, which is composed entirely of an Australian variety called Fairview. The beer’s striking tropical fruit, citrus and peach hop flavors and slightly resinous and aromatically dank earthiness are sure to electrify your senses.”

Served in an IPA glass. From the pour a white two finger cap forms over a cloudy amber/orange body. The head retains a good consistency but recedes and settles to a thin sheet leaving a good trail of streaky lacing behind it. The all Australian hop bill is made up of Ella, Galaxy, Topaz and Vic Secret. Essentially, Australia’s version of the USA’s big 4 ‘C’ hops (Cascade, Citra, Chinook & Centennial) that work so well with IPA’s. These 4 hops together offer up fruity wafts of rock melon, apricot, peach, paw paw, mango and hints of citrus. Certainly getting a bit of pine resin and aniseed coming through too. Kind of a nutty malt fragrance as well. Really nice. Plenty to like off the nose. In the mouth it’s quite sharp and a little astringent. The ABV weighs in at a hefty 8.7% and the 95 IBU asserts a lip puckering bitterness. The carbonation is moderate and the body is mild-medium. Upfront the palate is screaming grapefruit notes because it’s so bitter but it’s actually more like orange peel. Starting off sweet then becoming bitter. The extremely aggressive hop dryness clings to the front palate and doesn’t let go! Hints of citrus try to push through but it’s drowned out by the massively bitter finish. Great concept and lovely aroma but it’s just way too bitter. The 95 IBU will reflect that. A bigger malt presence could have pulled it back a little so that’s a bit of a shame. Gutted! We were really looking forward to a cracker here. Oh well can’t win em all.