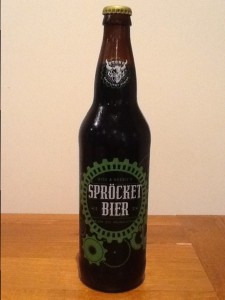 “Rick and Robbie’s Spröcketbier is the first ever winner of the Stone Spotlight Series brewing competition. A black rye Kölsch-style ale, it arose victorious over 18 other impressive entries ranging from barrel-aged stouts to fruit-laced sour beers and nearly everything in-between. A uniquely dark spin on this traditionally light-bodied German beer style, Spröcketbier delivers mild roast, effervescence and floral yeast presence in tremendously balanced form with the high level of drinkability that is the Kölsch style’s hallmark. Look for it on draft and in bottles in select markets throughout the country, along with the duo that created it, Quality Production Assurance Lead Rick Blankemeier and Production Warehouse Lead Robbie Chandler”.

Served in a snifter glass. We’re met with a mat black hue with a subtle edge of deep crimson that’s covered by a modest finger and a half of tightly packed tanned foam. The head gradually reduces and settles to a halo with reasonable lacing to show for it. The nose is nicely dominated by roasted chocolate malts, cocoa, licorice and a mild hint of coffee. Like Stone always do, a good hop presence is here, offering a suggestion of grassy/herbal notes along with a lick of tropical fruits. As it warms a complex Jaffa/Cointreau-like liqueur aroma creeps in. Unfortunately no rye is coming forward which is a shame because that extra touch of rye spiciness really would of rounded out this aroma. Still nice though. In the mouth it’s really light on with a dryness that develops late. Texture is quite thin with a low carbonation level. Light-moderate body with a well hidden ABV (5.4%). So smooth, really drinkable for a dark beer. Upfront we get roasted grainy malts and chocolate with a mild hop bitterness that forms early on the mid palate. This surprisingly sessional brew concludes with a light roasted bitterness and a touch of hop dryness on the tongue. We could easily imbibe this brew on a warm day despite the dark colour. No surprises though, this American brewery is one of the best in the world for a reason.