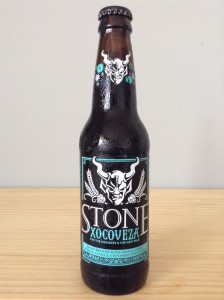 “Our chocolaty, winter-spiced mocha stout is back. This insanely delicious take on Mexican hot chocolate is crafted with cocoa, coffee, pasilla peppers, vanilla, cinnamon and nutmeg. First brewed in 2014 with San Diego homebrewer Chris Banker after his recipe was named the winner of our annual homebrew competition, it quickly became a cross-country sensation as craft beer media and fans cheered for Stone Xocoveza…and clamored for more. We too loved this beer, so of course we caroled ¡Claro que sí! Now gifted with a new name, Stone Xocoveza for the Holidays & the New Year has joined our eminent lineup of special releases. We’re releasing it just in time for that time of the year when the joyous spirit of giving is in the air and good behavior is generously rewarded.”

Served in a snifter glass. The appearance is mat black with absolutely no transparency. A modest two finger head props up before it recedes and establishes a thin overlay that leaves reasonable lacing as it ebbs. Where do we start with this aroma?! The olfactory’s are abuzz trying to isolate the long list of spices against the rich, heavy malts and chocolate. What is detectable are hefty notes of clove, cumin, nutmeg, cinnamon, vanilla, aniseed, cocoa, coffee, chocolate, peppers and a slightly left field scent of burnt rubber. Woah! There’s probably half a dozen others in here but we don’t have the nose or the space in this review for them. Incredible. What’s surprising is the mouth feel – it isn’t as heavy as we were expecting. It’s about medium in body with a nice progression down the throat. The 8.1% ABV is also masked very well and this kind of spicy numbness on the tongue has us intrigued. Not just your average imperial stout here, that’s for sure. Similar to the aroma the palate is lit up by a plethora of spice, malts and roasted notes. The heavy spices crescendo early on and as they soften a delicious creamy chocolate maltiness overtakes. The warming booze develops late and leads in to a dry, roasted and ultimately spicy finish with excellent length. We’d almost describe this as a spiced up version of the Founder’s brekky stout but we just can’t bring ourselves to say it. Our only gripe is that the spice does become a little overpowering by the end. That’s it! Everything else is absolutely bang on. Kudos, Stone.