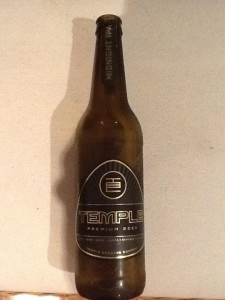 “The Midnight IPA takes a traditional India Pale Ale, a hoppy high alcohol beer originally brewed in England in the 19th century, and adds a 21st century twist: it’s jet-black. Brewed using a new roasted wheat from America (called Midnight wheat, and giving our beer its name), this black IPA achieves its colour without most of the roasted flavours and aromas you would normally expect in such a dark beer. Our take on this new sub-style of IPA is as hoppy as they come. The aroma offers an explosion of piney resinous hops, achieved through multiple kettle and dry hopping charges of Columbus, Centennial and Simcoe. If you were to close your eyes, you’d be convinced you were holding a highly hopped IPA from the Pacific Northwest. It’s deceptively smooth and sessionable, so tread carefully.”

A delicious beer. Served in an IPA glass the mat black pour constructs a decent two and a half finger beige head that settles to a thin cap on top. Laced well. Nice balance of caramelized and roasted aroma’s emanating here with a light addition of hops too. It’s encompassing everything from floral pine, grapefruit, toast, roasted malts, caramel, coffee and cocoa. In the mouth it’s creamy with medium carbonation. Medium-full body. Similar to the aroma, the flavour initially serves up sweet, caramelized malts with a mildly assertive hop dryness. The earthy mid-palate delivers a well balanced finish with light bitter and roasty notes. Good length on the tongue. At 7.2% ABV is really well disguised, you almost think its a strong porter but either way, it’s a top beer from a top brewery and we definitely believe this beer is in the top 20 of Australian craft beers.