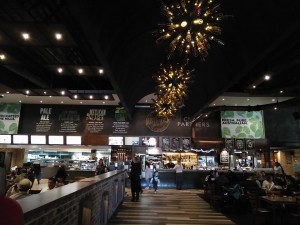 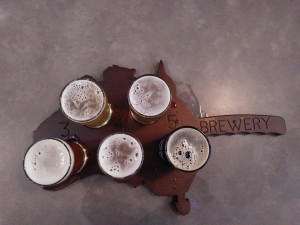 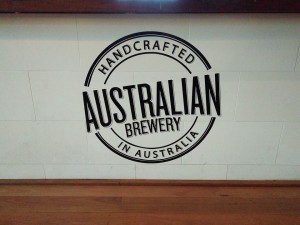 Upon arrival we instantly got the feel that this isn’t your typical craft brewery operating out of a transformed warehouse with quirky furniture and bearded lads behind the bar. Once we passed the screaming kids inside the big jumping castle in the car park we entered through the hotel-esque entry with high ceilings and really grand feel. The airy and considerably spacious main hall led us straight to the main bar which is big, spanning almost the width of the room itself. As this hotel/brewery also doubles (or should we say triples) as a family pub, night club and local watering hole the breweries beers are mixed in with the likes of Carlton Draught and VB, albeit in blocks at least. The range is pretty good. We started with the Pale ale – light, fruity and crisp with a nice bitterness, the Pilsner – clean, refreshing with hints of peppery spice and herbaceous hops, Mexican Lager – crystal clear, cheap Lager nose, really just a rip off of Corona (maize ruins it) the session IPA – light on, hoppy/fruity nose, citric and surprisingly full flavoured for a low ABV beer and the oatmeal Stout which was lovely and dark, tan head, roasted, chocolate, coffee and creamy. We have to also make mention of the Australia-shaped paddles. Great idea. As we didn’t have enough to fill another paddle we went for the Saison in a standard schooner glass (only $5), it had a big fluffy head, highly carbonated, spicy, citric, musty and funky. It was delicious, easily their best beer. We finished on their seasonal which was a 4.5% Belgian IPA, it wasn’t anything special, if anything it was a little muddled – sweet candy nose, fruit esters, a bit peppery. It made more sense when we were told that it was a blend of their Saison and session IPA. All in all the range is quite good with the session IPA, oatmeal Stout and Saison being the stand outs. It’s actually quite an impressive place and we can see why the locals love it, it covers almost every demographic. They have the TAB and sports bar out the back, bistro and kids play room in the main hall, the tap room with an outdoor beer garden off to the side and to top it off it turns in to a night club after dark. This kind of weathered copper look that they’ve used throughout the place hits the Australian feel well and really ties in with the huge frosted glass windows and spots of greenery. Technically, it has commercial hotel atmosphere combined with brewery characters thrown in. It’s a really well thought out venue, the only issue is it’s in the middle of nowhere! Rouse Hill to be exact, so we’d suggest finding accommodation nearby because it’s well over an hour walk from the closest train station. Perfect if you’re a local though!