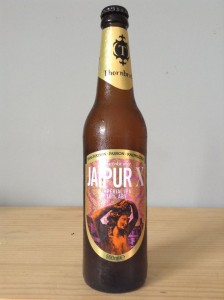 “Jaipur IPA is seen by many as the first and most successful beer of the new craft revolution in British brewing. This imperial version has been specially brewed to commemorate the 10th anniversary of Thornbridge beers and of Jaipur’s first brew on 7th June 2005.”

Served in an IPA glass. Interesting colour – very bright golden hue with a pretty dense haze laced through. It knocks up a short white head that retains very well, allowing a consistent set of rings to cling to the glass as it ebbs.
Wow about as far from your typical English IPA as one could get! The nose offers a direct citrus character – lemon and orange mainly with hints of mandarin in the background. It’s bursting with a myriad of other juicy tropical fruits like pineapple, lychee, guava and rockmelon. Maybe a boozy herbal note getting a look in too. Top shelf aroma, it reminds us of the super clean and crisp Firestone Walker IPA’s. The texture is somewhat creamy with a firm warmth from the 10% ABV. Relatively aggressive in bitterness (80 IBU) but not palate wrecking which is good. Medium body and Co2. Drinks well under its weight.
The flavour resumes with a heady dose of citric hops, tropical fruits, pine needle and marmalade. The warming booze presses forward with the hop bitterness and sweet, honeyed biscuit malts vying for attention through the mid palate. In typical IPA fashion the bitterness wins with a well drawn out finish that offers warming alcohol, pine and lemon citrus on the back end.
We can say 100% that if we were blindfolded there is no way in hell we’d pick this as an English IPA. As we mentioned earlier it has a lot of similarities to Firestone Walker IPA’s with its uber clean, sharp and piney notes. Impressive stuff here from Thornbridge.